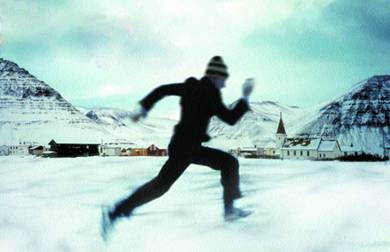 In May 2015, the usually jaundiced industry audiences at Cannes were surprised and invigorated by Rams, a drama set in a remote rural area of Iceland and directed by the effectively unknown Grímur Hákonarson,which went on to win the top prize in the festival’s prestigious Un Certain Regard section.

Rams was a revelation, and one that naturally invited a bewildered question: How is it that a remotely  located nation of 300,000 people — a country where sheep outnumber humans three to one, and which in its peak years of film production made only ten fiction features — could produce such a remarkable piece of cinema.  As with many such discoveries, however, this one was hardly unforeseeable, not least because it was only the crest of a wave.

In the months and years immediately preceding and following Rams’ Cannes triumph, films by Icelandic directors such as Dagur Kári, Rúnar Rúnarsson, Hlynur Pálmason and Ísold Uggadóttir picked up prizes at major  festivals around the world, while Baltasar Kormákur, who had previously established himself as a successful transnational filmmaker by directing films in his native country as well as helming Hollywood fare, scored a major international success with his ten-part television series Trapped, which sold all over the world after debuting at TIFF.

In Steve Gravestock’s  new monograph A History of Icelandic Film set out to chart the course of Icelandic cinema from the silent era to the present day, as the largely sporadic production from the 1920s to the 1970s gave way to the “Icelandic Spring” of the ’80s, the international inroads made in the ’90s by Fridrik Thór Fridriksson (the modern godfather of Icelandic cinema), the emergence of the scruffy hipster films that culminated in the worldwide success of Kormákur’s 101 Reykjavík, and the remarkable growth and diversity in Icelandic film production that we have seen in the first two decades of the new century.

The ten films in this series — ranging from magic-realist fables to bloody Viking epics, sardonic deadpan comedies to hard-boiled Nordic noirs — offer a snapshot survey of that remarkable evolution from the ’80s to today. — Steve Gravestock

The aged Thorgeir bids a silent farewell to the farm he has devoted his life to, preparing to move in with his daughter in Reykjavik. Receiving a chilly reception from his family, he is whisked off to a retirement home where he is reunited with an old flame. This lyrical, affecting road movie put Iceland on the world cinema map and is the only Icelandic film ever nominated for the Best Foreign Language Film Oscar.

Arnaldur Indridason’ bestseller, Jar City announced the mini-boom of “Nordic noirs” that gained international exposure with The Girl with the Dragon Tattoo. Called in to investigate “a typical Icelandic murder”, hard-bitten, chain-smoking, Erlendur discovers the victim is connected to nefarious goings-on 30 years ago, involving a dead child, a crooked cop, and “the most notorious maniac in Iceland.”

Life in a Fishbowl (Vonarstræti)

This absurdist fable follows Umbi, a young emissary sent by the Bishop of Iceland to investigate a village at the foot of the famous Snaefells glacier. Umbi finds the local church shuttered and the village a haven for all kinds of theologically unorthodox oddballs including an anarcho-hippie cult and the pastor’s mysterious, estranged wife, who has returned from the dead after transmogrifying into a fish! Under the Glacier is profoundly cerebral, kind of trippy, and one of the most daring Icelandic films of the 1980s.

The first film in director Gunnlaugsson’s epic Viking trilogy, opens as a young Irish boy witnesses the slaughter of his parents and the kidnapping of his older sister by marauding Viking warriors. Years later, the now-grown boy, known as Gest, arrives in Iceland seeking to exact vengeance.

This stunning magic-realist fable follows a lonely young girl who shuttles back and forth between her small coastal village in 1936 Iceland and her 14th-century fantasy world, populated with the familiar faces of her real life. While in current-day she eagerly awaits a visit from the ship of (true-life) French polar explorer Jean-Baptiste Charcot, her fantasy narrative unspools a tale of vengeance and sorcery that explains the origin of a curse that supposedly haunts the region to this day.

In this satire, a group of American soldiers mysteriously set up camp near a small town. A youth-club leader becomes a vocal opponent of these armed foreigners. Heavily influenced by his crush on a strident town communist, he organizes anti-American demonstration with her but it gains little traction. When word gets out that the Americans are searching for treasure, comic chaos ensues.

This festival-circuit hit focuses on two sheep-farming brothers — boastful, hard-living Kiddi and stern, solitary Gummi — who haven’t spoken to each other for 40 years, despite the fact they live and work on adjoining farms. When Gummi spots a dead sheep in his brother’s field and then finds symptoms in his rivals’ flock that point to the lethal disease scrapie, the furious Kiddi thinks his jealous brother is trying to cause trouble for him. Masterfully balancing deadpan comedy and heart-wrenching pathos.

Directed by Róbert I. Douglas

Unlikable “entrepreneur” Tóti is a failure at every one of the many crazy schemes he turns his hand to. Tóti is abusive to family and friends, loathed by his ex-wife, and a stifling bore to his young daughter. Tóti’s latest idea, illegally importing Bulgarian cigarettes, threatens to be another fiasco. But when the smuggled smokes are found to contain a sought-after herb, it may be that his luck has turned.

Fusing a quirky, deadpan sense of humour with the almost surreal atmosphere of its eerily still, isolated setting, this film follows a teenaged loner living with his grandmother in a small fishing village in Iceland’s West Fjords. He is perpetually at odds with his teachers, his principal, and his whole sleepy town, but things start looking up when he meets a new-girl-in-town who works at the local gas station.